You are here: start » setting_up_test_development_environment

This page is outdated. Please help completing the wiki updates.
(remove this paragraph once the page is updated)

Vagrant is free and open-source software for creating and configuring virtual development environments. It can be seen as a wrapper around virtualization software such as VirtualBox, and around configuration management software such as Chef, Salt or Puppet.

Ansible is an open-source software platform for configuring and managing computers. It combines multi-node software deployment, ad hoc task execution, and configuration management. It manages nodes over SSH and requires Python (2.4 or later) to be installed on them. Modules work over JSON and standard output and can be written in any programming language. The system uses YAML to express reusable descriptions of systems.

ODM developers can choose Vagrant for managing Virtual Machines where testing and development tasks can be undertaken. For this, following software needs to be installed and configured:

Provisioning a Vagrant VM with Ansible

odm-deployment repo on github contains, among other scripts, the necessary files to configure and provision a Vagrant box for development. For cloning it using the terminal, type:

This command will download the code from the repository, it contains also other useful scripts that we will need afterwards. Following files interests us particularly:

Step 3: Starting the box for the first time provisions it

In order to start the development box, change directory to where the Vagrantfile is and type:

This will take some time because the virtual box will be provisioned with the instructions specified in the bootstrap.sh. This script basically install some needed dependencies such as git and ansible and runs the set of Ansible instructions available on deployment/ansible in order to provision the VM.

The provisioning process might take between 5 and 15 minutes, depending on the power of your machine and speed of your internet connection.

For more information about provisioning Vagrant, refer to Vagrant documentation

Aparently, the VM needs to be restarted once after the deployment is ready in order for the different services to start properly. Following command needs to be run:

If Errors occur during vagrant up

Sometimes, the deployment of the Development Environment will be stuck at some points that caused by wrong configuration or the speed of internet connection.

* Please check “ansible\group_vars\vagrant-box” to make sure that all requirement attributes below are provided:

Change the location of Ubuntu servers

* If they are correctly provided, then try to change the location of Ubuntu servers to different regions that is closer to your location.

Fail due to Internet connection issue

Please go ahead to download the solr and tomcat below and place them in “odm-deployment\installables”.

Once the process is finished and no errors have occurred, it is time to access the machine via ssh. There are still some necessary steps to be done.

Exit the ssh session and call vagrant halt, this way the box will be stopped, you can start it any time by calling vagrant up again.

Deploying on Webfaction with Ansible

Replicating the system on a Webfaction instance uses the same Ansible scripts used for the Vagrant VM.

As specified above, the ansible/group_vars/webfaction-servers file must be edited with URLs and Ports defined on webfaction prior to starting the provisioning.

Add a new domain such as ckan.yourwebfactionusername.webfactional.com and press save. For the sake of the example, my webfaction user is opendevmk therefor it'll be ckan.opendevmk.webfactional.com

Now we need to add applications for Tomcat and Ckan, which basically reserves a port on the server and optionally exposes it on the firewall or a domain. Go to “Applications” then click “Add new application” 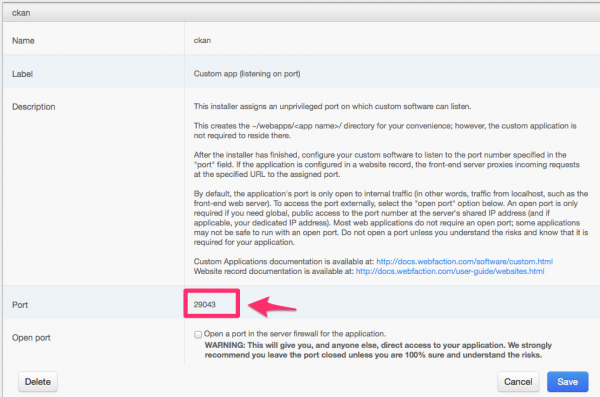 Repeat for app name ckan then when you click on the entry you've just added you'll see a port number. Note them down you'll need it later. 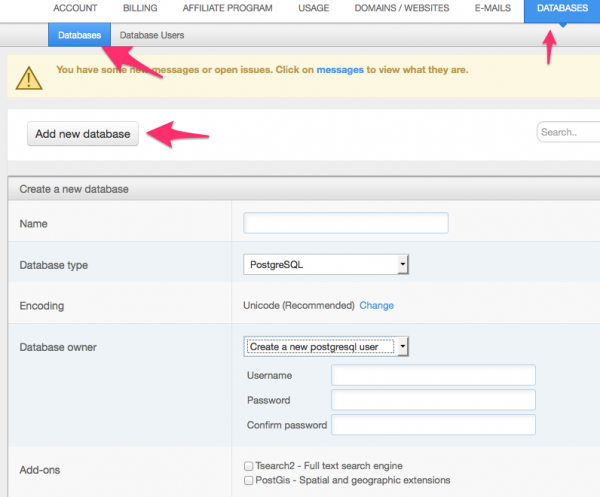 In order to start the provisioning, we need to run the ansible-playbook command:

The provisioning scripts installs CKAN and its dependencies plus the odm_theme & odm_utils extensions, but there are still some actions to be taken in order to configure the development environment completely.

Please refer to Migrating from previous System and follow the instructions specified there in order to initialize the recently created test & development environment with real data.

The previous Ansible scripts provisions the box with a basic wordpress installation which will be listening to port 80. In order to finish configuring it point your browser to the URL specified on the configuration files and follow the instructions there.

Accessing the code on the Development Box

There are several possibilities to access the files system on the VM in order to modify code files such as copying files over with SCP command or creating a NFS mount point on the VM.

Sometimes it can happen that the during the “Update packages list” step of the common Ansible playbook, the following error is thrown, stoping the execution of the provisioning. 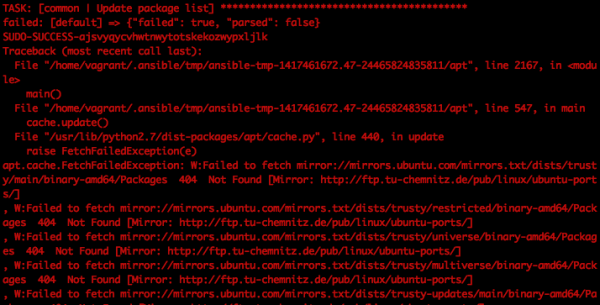 In order to solve this, a failsafe sources list can be selected. For that, it is just necessary to change the following line in the deployment/ansible/roles/common/tasks/main.yml file:

And replace src=sources.list with one of the available failsafe sources lists in deployment/ansible/roles/common/tasks/main.yml

On start, CKAN and Tomcat not started

If the machine is provisioned and started but CKAN and/or Tomcat are not accesible through their respective URLs, it can be that supervisor has not being able to start them for some reason. In order to manually start them: